Importance of understanding that imaging technologies are much more than the 'megapixels'
by Praneeth Baratam
Edit
Maven
Level 8
2
Praveen Baratam - 9 years ago Permalink Edit
'Instantaneous Panoramic Image and Video Capture' is a very interesting technology that can boast a grand marriage with our beloved smartphone in the near future. A 360 degree interactive video that lets you, the viewer, choose the perspective you want instead of restricting yourself to the perspective of the person who captured it is definitely appealing to a large audience. Such videos also lend well to interesting post processing and editing effects for even more tantalizing mixes!

Currently, third-party accessory + app combos that enable this functionality are available for the iPhone but these are just clever hacks and are only the beginning in my opinion!

The real action starts when manufacturers integrate this functionality into their devices with optimized hardware and software to enhance the fidelity of the captured panoramic images and videos. However, such integration has to be done without sacrificing the aesthetics / ergonomics of the device and can be a difficult challenge for the OEMs.

Having multiple cameras (similar to the front facing camera) on all the faces, capturing synchronously and then algorithmically stitching those captures in real time is one approach. A more aesthetically pleasing approach would be to have a push-to-release and push-to-hide panoramic-mirror + camera assembly with image transformation algorithms to correct the skew!
Save Cancel 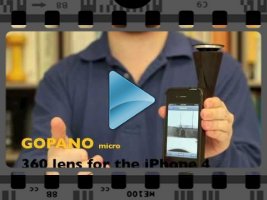