Let us discuss the penultimate guiding principles for Life; beyond the obvious love, compassion, etc.
Image: https://en.wikipedia.org/wiki/The_Thinker
by Praveen Baratam
Edit
Maven
Level 8
6
Praveen Baratam - 8 years ago Permalink Edit
I often wonder what would happen if we lose most if not all the knowledge and wisdom we have acquired in the past few centuries.

May be the least common denominator for humanity is war, exploitation and superstition.

Any man/group confident enough to conquer or exploit will do so if they are not bound by an intricate web of obligations, emotions and dependencies.

Moreover we cant stop thinking and when we try to reason or explain some phenomenon when we are not yet equipped to do so, we end up explaining it the wrong yet acceptable way giving rise to superstition. I believe superstition will reign high as long as there are unexplained things and uninformed men.

In fact religion can be viewed as a scheme devised by the then wise to use the unexplained for taming people down into a sustainable society which was later modulated and exploited to foster the same evils it was meant to fight against.

Somehow men tend to modify and use anything at their disposal to exploit others.
Save Cancel 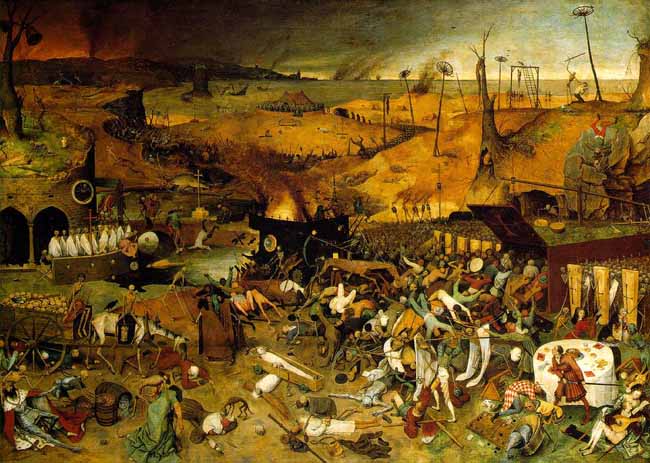 13 Comments - Show All
Praneeth Baratam, Evangelist - 8 years ago Edit
The concept of 'divine creation' predates scientific understanding by several eons and so the pervasive nature of its permeation, even among the scientific community. The concept of 'divine creation' also offers a one stop shop answer for all the questions that humanity may pose. Scientific method tries to reason and provide a possible/probable answer which evolves with time as our understanding of the universe improves. It unfortunately is an incremental process.
Save Cancel
Praneeth Baratam, Evangelist - 8 years ago Edit
To displace an existing answer is a herculean task. Science actually is trying to provide a logical and fact-based alternative explanation for the questions that have already been answered by the concept of divinity. It has only succeeded in part, as there are several more unsolved mysteries. I believe science will stand a greater chance to compete with its rival sometime in the future. Until then, I believe religion will continue to be a tool of exploitation.
Save Cancel
Praveen Baratam, Maven - 8 years ago Edit
I guess it all boils down to saying and accepting .... "We dont know yet but we are going to find out soon."
Save Cancel
Raja Malla, Evangelist - 8 years ago Edit
The fact that we have instincts of self-preservation should help support us and keep us away from complete war and destruction. Yes, war as an instrument would be there but more likely it would be balanced by our inner voice of self-preservation. That is one reason I personally have come to a conclusion that issues like gun ownership by regular citizens or even nuclear weapon by states as tool are all intractable problems. We will and have to continue to muddle through.
Save Cancel
Praveen Baratam, Maven - 8 years ago Edit
Historically war had deep rooted relations with belief systems and leaders have often used a set of beliefs to gather popular support for conquest. If we set aside the popular propaganda for war, the core motivation often revolves around riches, resources and power. Only with the advent of "Nuclear States" did "Mutual Assured Destruction" reign in and calmed down war cries. Probably a rehaul of belief systems is the need of the day which means attacking superstition at its roots - Acts of God.
Save Cancel
Praneeth Baratam, Evangelist - 8 years ago Edit
The sad part of the situation is that, religion is one tool that the 'maliciously motivated' are using. You eliminate superstition and remove religion from the equation, 'they' will find some other tool to play their game.
Save Cancel
Praveen Baratam, Maven - 8 years ago Edit
Religion and superstition out of the equation means we have a rational population who think and analyze before they believe. Its difficult to lure such people into some other form of trickery and persuasion. But getting those two out of the society is an improbable feat.
Save Cancel
Praneeth Baratam, Evangelist - 8 years ago Edit
Scientific wisdom has greatly changed our lifestyle these days, but people still hang onto superstition. Many great rational thinkers also happen to believe in the irrational yet convincing blind faith. Repealing superstition will hardly end the game, in my opinion.
Save Cancel
Nicholas Bc Shumate, Evangelist - 7 years ago Edit
@Praveen- As far as I have been able to determine that is true to an extent, however you're forgetting about the power of fear. Fear makes people irrational, even the most rational and logical people have difficulty controlling it. Consider the US regime's steady transition from a secular to Judeo-Christian rhetoric and policies since around the 60's.
Save Cancel
Nicholas Bc Shumate, Evangelist - 5 years ago Edit
@praneeth- the grip that superstition has on the majority of humanity is so strong due to the largely scientifically illiterate portions of global populations, giving rise to charlatans, and pseudoscience permeating various facets of global cultures. I highly recommend the novel written by Carl Sagan- A demon haunted night: Science as a candle in the dark. In it he discusses these issues at length.
Save Cancel
Praveen Baratam, Maven - 5 years ago Edit
@Nicholas - One more issue here is that many well educated folks look at science as just another way to explain things rather than deem it the only way to truth. People need simpler answers and religion gives them just that. Brain twisting philosophical discourse is not to everyone's taste. contd...
Save Cancel
Praveen Baratam, Maven - 5 years ago Edit
Even the most scientifically literate people have trouble accepting the gaps in scientific understanding (Ex. Purpose of Life) and fall to fictitious explanations. Probability also wreaks havoc in many brains. (Ex. Why me?) Fundamentally our brain / memory is a belief system than a probability machine.
Save Cancel
Nicholas Bc Shumate, Evangelist - 5 years ago Edit
@Praveen- I disagree that the human brain is fundamentally more aligned to a belief system than a probability machine. I would instead argue that the because our brains are fundamentally probability machines belief systems are more prosperous. What I mean by that is that because of the probability of our existence being so small at first glance it leads us to assessing the probability of divine creation to be more realistic.
Save Cancel
There is a 500 character limit on every comment. The input box border turns 'Orange' when you are half way through and 'Red' after you reach the limit. Line breaks are not allowed in comments.
Post Comment Cancel
« View More Posts From This Topic or Create One Now!
Wonderful Web 2.0 Worlds
The future of eCommerce, as far as my imagination goes...
Who Stole Whose?
Very few people realize that a very useful innovation...
What Makes Us Evil?
Its sad that we have started to romanticize and lust for...
The Next Big Thing In Personal Computing
Aren't WiFi routers too dumb for today's digital...
The Miraculous Mind
This talk has changed my entire perception of life and...