Nuclear Energy - Implications to world
by Tarak Nagireddy
Edit
Alawys express your thoughts and ideas with relevant images and videos to communicate more effectively. There is a 1400 character limit on every post. The input box border turns 'Orange' when you are half way through and 'Red' after you reach the limit. Only line breaks are allowed in posts.

PS: You cannot create Posts until you reach Level 3 - More Info
Evangelist
Level 4
0
Manigandan Muthusamy - 10 years ago Permalink Edit
There are alternative nuclear technology that are safe and can sustain for a very long time, see this company called http://www.terrapower.com they have the concept called travelling wave reactor which works by processing u238 instead of u235 which is used in conventional nuclear technology
Save Cancel 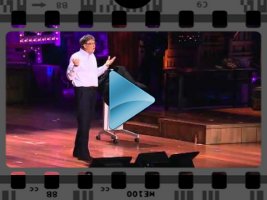 3 Comments
Praveen Baratam, Maven - 10 years ago Edit
Interesting technology! Suddenly all the nuclear waste from regular enrichment process is useful as fuel. Given the energy to waste ratio of this technology may be its even possible to dump the waste on moon :-) But its still in conceptual stage and can be more than a decade away.
Save Cancel
Barney Lerten, Contributor - 7 years ago Edit
Is fusion a better answer? Or solar, wind, wave power?
Save Cancel
Praveen Baratam, Maven - 7 years ago Edit
@Barney - Fusion is a future possibility. We can discuss it when it becomes a reality. Coming to rest of the available choices, it will be a mix and match and the overall goal should be to lessen our energy consumption. In short energy should become much more expensive to encourage sensible consumption. Reduced energy needs will reduce our impact on the Environment.
Save Cancel
There is a 500 character limit on every comment. The input box border turns 'Orange' when you are half way through and 'Red' after you reach the limit. Line breaks are not allowed in comments.
Post Comment Cancel
Evangelist
Level 4
2
Sravan Kumar Voona - 10 years ago Permalink Edit
Mining a radio active material is highly risky and unsafe .My opinion is yes it is a risky operation but we do have many techniques to make the mining most safe as possible, i think large amount of energy @ that risk is good .so what do you think about it .....should we start more radio active mining or to stop the existing mines in ???
Save Cancel 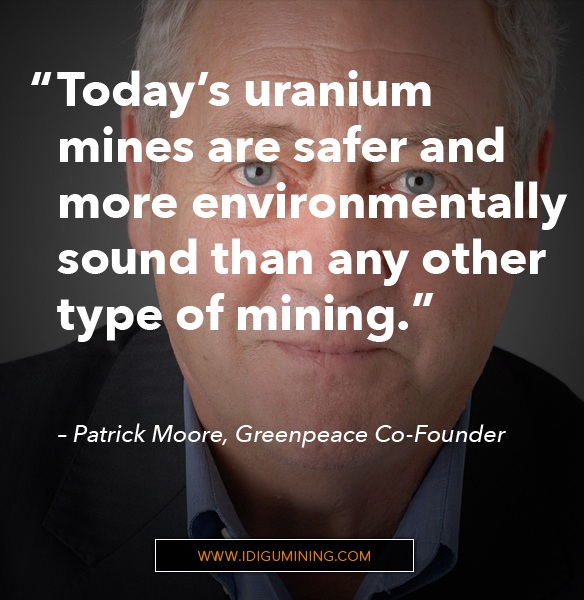 2 Comments
Praveen Baratam, Maven - 10 years ago Edit
Can we afford to stop mining Uranium? What alternatives do we have other than Coal? Is mining and burning coal safer? More practical agenda would be to make Uranium mines even more safe for workers as well as surrounding populations. But can governments actually enforce these policies?
Save Cancel
Nicholas Bc Shumate, Evangelist - 9 years ago Edit
@ Sravan-A question on mining, in the 1980's there were a series of mines opened in the upstate in the mountain range in South Carolina, now the companies are pushing for the use of Sodium Cyanide pooling to get the remaining basically dust, out of each mine. I feel this is unsafe, and incredibly ill advised, is that just my natural reaction at the word Cyanide?
Save Cancel
There is a 500 character limit on every comment. The input box border turns 'Orange' when you are half way through and 'Red' after you reach the limit. Line breaks are not allowed in comments.
Post Comment Cancel
Maven
Level 8
2
Praveen Baratam - 10 years ago Permalink Edit
TerraPower Nuclear Technology as discussed earlier has tremendous potential and is a fourth generation nuclear reactor technology.

Its a form of Breeder Reactor that not only produces fissile material from abundant fertile material (U238) but also burns it in the same cycle with out requiring any reprocessing.

May be nuclear power will one day emerge as the panacea to this ailing energy hungry world! 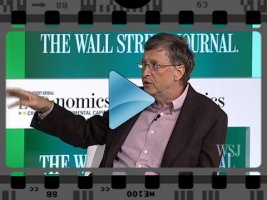 6 Comments - Show All
Praneeth Baratam, Evangelist - 10 years ago Edit
Its appreciable to see Bill Gates supporting the 'Innovation to Zero'. His concept of convincing the climate advocates and skeptics with the economics argument is extremely effective in my opinion. This may need a lot of bureaucratic convincing in the developed countries like USA. But, the real use is in the developing countries like India, where contemporary energy costs are higher with a lot of energy deficit.
Save Cancel
Praneeth Baratam, Evangelist - 10 years ago Edit
The problem though is that these technologies are not ready to deploy. They need considerable incubative research to shape into meaningful and deployable form. The timeline for Terrapower Nuclear technology is 20 yrs for incubative research and another 20 yrs for widespread deployment. I believe countries like India need something ready within the next decade to prevent a major energy scarcity. Nevertheless, I believe, India should still volunteer to be the testing ground.
Save Cancel
Praveen Baratam, Maven - 10 years ago Edit
India and many other countries are facing acute power shortages for decades now and there are very few alternatives to coal for affordable energy. I doubt if even coal is affordable anymore. But the real question is what do developing countries have with them, to trade with these research firms, for cheap access to these technologies when they are ready?
Save Cancel
Praneeth Baratam, Evangelist - 10 years ago Edit
@Praveen, I think developing countries like India and China definitely have a lot to trade with the companies like Terrapower. Firstly, since these are breeding technologies needing diplomatic, financial and land to conduct their research which in my opinion, developing countries have in required amounts. Its easier to earn diplomatic and popular support in such countries given some lack of awareness among common public (it depends on how the political community drives it).
Save Cancel
Praneeth Baratam, Evangelist - 10 years ago Edit
And China is leaving no stones unturned. It already has Molten Salt Reactor research going on in full scale.
Save Cancel
Praveen Baratam, Maven - 10 years ago Edit
China is totalitarian and can pretty much pursue anything that the communist party deems appropriate. Where as India has a sensitive situation at hand. Abysmal research budget, unstable political climate, gullible citizens who can be led to believe anything by warring political parties, etc. almost lock the policymakers in a stalemate. There is nothing that India can give to these efforts and we will have to cough up heavy premiums when these technologies ultimately mature.
Save Cancel
There is a 500 character limit on every comment. The input box border turns 'Orange' when you are half way through and 'Red' after you reach the limit. Line breaks are not allowed in comments.
Post Comment Cancel
Evangelist
Level 4
1
RamGopal Neerukonda - 10 years ago Permalink Edit
US Geological Survey (USGS) says that India had 30% worlds Thorium reserves.This can be effectively utilized to produce the the energy.If this is implemented effectively then India can play a good role in generating energy from thorium and set an example to the rest of the world 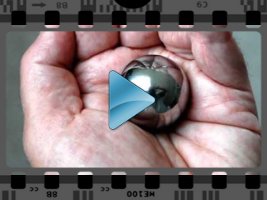 One comment
Praneeth Baratam, Evangelist - 10 years ago Edit
India is definitely making a stride in the right direction. Apparently, India has been perfecting a technology called AHWR (Advanced Heavy Water Reactor, using Thorium as its fuel) at the BARC (Baba Atomic Research Center) over the last decade and their efforts are ready to bear fruit. A AHWR is being planned to be constructed in Maharashtra or Tamil Nadu by 2016. While this may not be as safe as a LFTR (Liquid Flouride Thorium Reactor), it is a giant leap for India toward energy independence.
Save Cancel
There is a 500 character limit on every comment. The input box border turns 'Orange' when you are half way through and 'Red' after you reach the limit. Line breaks are not allowed in comments.
Post Comment Cancel
Maven
Level 8
2
Praveen Baratam - 10 years ago Permalink Edit
Liquid Fluoride Thorium Reactors (LFTR) - Safe & Cheap

LFTR was also invented by Alvin M. Weinberg, who pioneered Light Water Reactor (most common nuclear reactor) and has much better safety profile than any other civilian nuclear power technology. The greatest advantage with Thorium is that it is abundant, has better chemical and physical properties and yields more usable power than Uranium.

Mr. Weinberg as head of Oak Ridge National Laboratory, USA, demonstrated in the 1970s that LFTR is a much better technology for power generation while LWR is complicated and unsafe.
Save Cancel 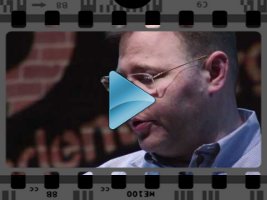 3 Comments
Manigandan Muthusamy, Evangelist - 10 years ago Edit
This is one thing that our former President and Scientist APJ Abdul Kalam has been talking for many many years in India, http://articles.timesofindia.indiatimes.com/2007-04-27/europe/27879135_1_energy-independence-thorium-nuclear-power http://www.rediff.com/news/2006/mar/08prez.htm
Save Cancel
Manigandan Muthusamy, Evangelist - 10 years ago Edit
A more detailed talk here http://www.thehindu.com/opinion/op-ed/article2601471.ece
Save Cancel
Praveen Baratam, Maven - 10 years ago Edit
Mr. Kalam's vision for Thorium fuel seems to be hinging over Fast Breeder Reactors, which are dangerous. They require reprocessing of highly radioactive breeder bed to recover U233 for further use. The goal should be to develop Once Through Thorium Fuel Cycle where Thorium is burnt in-situ.
Save Cancel
There is a 500 character limit on every comment. The input box border turns 'Orange' when you are half way through and 'Red' after you reach the limit. Line breaks are not allowed in comments.
Post Comment Cancel
Evangelist
Level 5
0
Tarak Nagireddy - 10 years ago Permalink Edit
Nuclear power is the use of sustained nuclear fission to generate heat and electricity. All the countries in the worlds are racing to use nuclear energy to generate power including India. World did not forgot the Chernobyl Disaster in 1986. After many nuclear disasters post Chernobyl disaster world realized that we cannot prevent any nuclear accident to happen and the recent Tsunami which created a scare among the international. This accident resulted in stopping of nuclear reactors that were affected by the accident. After one year the reactor was again started but was welcomed with the protests across Japan stating that cost of lives is greater than cost of economy.
Save Cancel

4 Comments
Praveen Baratam, Maven - 10 years ago Edit
While nuclear power is projected as cleaner than Coal powered plants there are many issues related to nuclear waste disposal, safety and national security. Given the current state of affairs, nuclear power can prove to be a very expensive alternative to coal in developing countries.
Save Cancel
Tarak Nagireddy, Evangelist - 10 years ago Edit
It also has the risk of getting in the hands of terrorist which will result in unimaginable dmage
Save Cancel
Praveen Baratam, Maven - 10 years ago Edit
While renewable power sources are being investigated its a fact that they are unreliable and cannot just replace all sources of power. We need to dedicate resources for R&D in Nuclear Power Technology as coal even if its acceptable for now is suicide in the long run.
Save Cancel
RamGopal Neerukonda, Evangelist - 10 years ago Edit
Thorium can be used for generating the nuclear energy.Check my post on LFTR for further information
Save Cancel
There is a 500 character limit on every comment. The input box border turns 'Orange' when you are half way through and 'Red' after you reach the limit. Line breaks are not allowed in comments.
Post Comment Cancel
Evangelist
Level 5
0
Tarak Nagireddy - 10 years ago Permalink Edit
We need to understand the implication of nuclear accident in India which is most densely populated and it may prove too costly to handle any accident. Recent protest by the locals near Kalpakkam nuclear plant only shows the pain people living there are showing. Let’s support the movement and say no to nuclear energy and Government should consider more other options which are safer and cleaner.
Save Cancel