This particle was discovered on July 4th, 2012 at the Large Hadron Collider located in Switzerland
by Nicholas Bc Shumate
Edit
Evangelist
Level 4
2
Nicholas Bc Shumate - 9 years ago Permalink Edit
A little rundown on string theory and our universe as told by Brian Greene. The Large Hadron Collider was built and is being used to find and identify, in theory, dark matter. It is called Dark Matter because we aren't exactly sure what it is, we just see it's effects on the universe.

String Theory is some crazy stuff, Basically There are small "Strings" in the center of every particle that vibrate at certain frequencies which result in a Classical Physical breakdown that we interpret as the various elements that make up our world.
Save Cancel 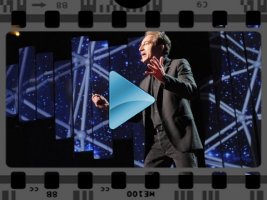 9 Comments - Show All
Praveen Baratam, Maven - 9 years ago Edit
@Nicholas - I was watching this spanish movie, 'Agora', yesterday which revolves around the life of a philosopher-astronomer, Hypatia, during Pagan-Christian conflict in Alexandria. What's interesting is a scene - one of Hypatia disciples questions her about the validity of Ptolemy's Geocentric model on just one ground that rules of Universe cannot be complex. This thought haunts her intellect and propels her to investigate the Heliocentric model in search of simplicity and evidence. Contd...
Save Cancel
Praveen Baratam, Maven - 9 years ago Edit
The key takeaway for particle physics from the above described context could be that may be we are chasing an illusion just like the Ptolemy's model of Universe. Ptolemy's model was not a theological one to start with, it was based on observations and rational arguments as per our understanding then. Hypatia herself struggled to explain against it because her knowledge of universe argued in favor of it. (No historical evidence of her interest in Heliocentrism has been found) contd...
Save Cancel
Praveen Baratam, Maven - 9 years ago Edit
I am not a physicist, astronomer or anything and I do not have the minimum expertise to make this comment but I can see how our current knowledge and proposed complexity in particle physics (String Theory, Dark Matter, Multiverse, etc.) parallel those of our past arguments in favor of Ptolemy's model of universe which in the end proved to be a theory centered on an illusion. May be the universe and everything in it have simple beginnings, constituents and laws and we are chasing an illusion.
Save Cancel
Nicholas Bc Shumate, Evangelist - 9 years ago Edit
@Praveen- I see what you mean, however in all honesty, Quantum Mechanics is only extremely counter Intuitive on paper, When seen in action and tested, it makes sense but in a very counter Intuitive way. Take Schrodinger's cat in the box theory, which was originally posed to disprove Quantum physics, where you have a chunk of depleting Uranium in a box with a cat, and you put the lid over it, you cannot know the state of either the uranium or the cat until you actually observe the contents..cont
Save Cancel
Nicholas Bc Shumate, Evangelist - 9 years ago Edit
of the box, Schrodinger postulated that truly all you had to do was open the box to see and so there for QM (Quantum Mechanics) was a bunch of hocus pocus. However, QM is centered around what we call The Observer, and this is what Schrodinger hadn't taken into account, was that without opening the box, the events would never be Observed, and so could literally be all things at once and nothing. Further more, going to a testable way to see it in action without a big bank account would be to..cont
Save Cancel
Nicholas Bc Shumate, Evangelist - 9 years ago Edit
take two pieces of pencil graphite, tape them together so that there is a tiny slit going vertically and shine a laser pointer at the slit facing a wall and you will see the breakdown of the wave patterns, which works off of the principle that all matter, right down to the electrons and neutrinos are waves as well as particles, known as Particle/Wave Duality, and when the light passes the slit, it's particles are forced to show the true nature of how the Quantum World functions.
Save Cancel
Praveen Baratam, Maven - 9 years ago Edit
@Nicholas - I was not referring to the counterintuitive nature of Quantum Mechanics and the behavior of subatomic particles but to our own understanding of these particles themselves. Particle Physics is taking interesting turns these days and all i said before falls into this realm. Just read through Quarks and Mesons on Wikipedia and you will see the pattern I am talking about! Charge, Color, Flavor, Spin, Mass, Weak Forces, Strong Forces.... and then String Theory with all its implications.
Save Cancel
Praveen Baratam, Maven - 9 years ago Edit
Contd... See http://goo.gl/Nkpg3e and http://goo.gl/aBT340 for more...
Save Cancel
Nicholas Bc Shumate, Evangelist - 9 years ago Edit
@Praveen- indeed, I see what you mean. What are your thoughts on application of Quantum Mechanics to everyday life?
Save Cancel
There is a 500 character limit on every comment. The input box border turns 'Orange' when you are half way through and 'Red' after you reach the limit. Line breaks are not allowed in comments.
Post Comment Cancel
« View More Posts From This Topic or Create One Now!
The Miraculous Mind
This talk has changed my entire perception of life and...
Talking Chimpanzee
Wow. I am blown away not only by the implications of...
Robotics & Beyond
From times immemorial, we have dreamt of a faithful...
Re-imagining Imaging!!!
'Instantaneous Panoramic Image and Video Capture' is a...
Quantum Perception
Mr. Smolin Makes exceptional points in this talk that...