A chronicle of the attempts at education that did and or will back fire, here we hope to corroborate the data that doesn't work, so that we can begin to move in the proper direction!
by Nicholas Bc Shumate
Edit
Evangelist
Level 4
0
Nicholas Bc Shumate - 9 years ago Permalink Edit
The Common Core State Standards are in a word, messy. The States, 41 in total, accepted the standards in 2009 which was required for federal money to nullify the No child Left Behind act, which was put in place so no child would be forced to take education at an under rated school regardless of region, when the standards themselves had not been written until 2010. Great economic lesson, buy a product that doesn't even exist.

The standards are being pushed by the NGA, National Governors Association, and the CCSSO, Council of Chief State School Officers, which both got their funding, $360 Million and $100 Million, to create both the Standards and the Assessments, when the US department of Education's budget for 2013 is $30 Million short of the budget used just to write the tests, so how is this going to work?

The Federal government has left it mostly up to the states, but has no way of making sure the states follow through. More over the Fed has set a mandate for a Longitudinal Database on students, I get sick just thinking about the possible atrocities waiting to happen there. So who funded this all? The Bill and Melinda Gates foundation. Who is funding the Department of Education? We the People. Somehow I don't think the check books are going to balance there. We should have taken that money and invested it directly into the school system, giving teachers what they need.
Save Cancel 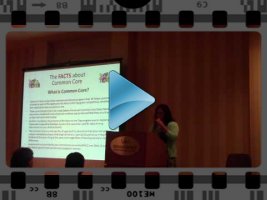 7 Comments - Show All
Praveen Baratam, Maven - 9 years ago Edit
First of all I am an outsider to the system. So bear with my ignorance if I spillover. To begin with, I dont see this initiative as a waste entirely. Obviously Bill Gates dint give away millions for nothing and I can relate to his reasoning on this. A set of minimum standards is indispensable to move ahead. I wish they are extended to other faculties in the near future. Science, History, Philosophy, etc. deserve this treatment too. Regarding the student database - its a double edged sword!
Save Cancel
Nicholas Bc Shumate, Evangelist - 9 years ago Edit
@Praveen- Indeed, but the budget for the execution of the standards is pale in comparison to the funding that created them! How can we reasonably expect teachers to perform to y standard if we spent 3x to create y, and give the teachers 1/2x to carry out y?
Save Cancel
Praveen Baratam, Maven - 9 years ago Edit
@Nicholas - The initial investment by Gates Fund served the purpose of creating the standards and assessments to get the whole thing started. A push in the right direction albeit expensive. And now the Federal government is extending help to state run schools provided they comply which is also a clever move. Irrespective of the funding required/given, dont you think its wise to have a minimum set of standards enforced on education. Think from the curriculum angle and not the assessment angle.
Save Cancel
Nicholas Bc Shumate, Evangelist - 9 years ago Edit
@Praveen- Indeed however those standards should also be reasonably achievable on the time scale they are talking about. Students have two semesters in school, k-12, composed of 18 weeks split between 6 classes per day, it's easy to give teachers a bunch of statements contd...
Save Cancel
Nicholas Bc Shumate, Evangelist - 9 years ago Edit
...It's a whole other to expect them to do it with money they don't have. The standards themselves are vague, and the solutions to the test problems counter intuitive at best. Most teachers have to buy supplies out of their own wages here already, this will force them onto welfare, because it doesn't provide specific guidelines, they cannot provide specific instruction. It was a mess started under the Bush Jr administration that was further propagated by people who had no...contd
Save Cancel
Nicholas Bc Shumate, Evangelist - 9 years ago Edit
....background in education, and no accreditation to make decisions regarding educational standards.
Save Cancel
Praveen Baratam, Maven - 9 years ago Edit
@Nicholas - This effort has just begun its journey. The goals are vague and expectations high. There will be a lot of head banging to the wall and the teachers have my sympathies. As always change is not easy and all the good never happens in one stroke. Even American Constitution did not treat all men equal until much later. The necessary fine tuning will happen with time. What we should now advocate for is the resources/amendments needed to see this through and not to rollback these changes.
Save Cancel
There is a 500 character limit on every comment. The input box border turns 'Orange' when you are half way through and 'Red' after you reach the limit. Line breaks are not allowed in comments.
Post Comment Cancel
« View More Posts From This Topic or Create One Now!
Wonderful Web 2.0 Worlds
The future of eCommerce, as far as my imagination goes...
What Makes Us Evil?
Its sad that we have started to romanticize and lust for...
Telecom & Internet Revolution
How many times did we come across a situation where...
Smart & Frugal Living
Have you ever lived under a roof directly exposed to the...
Health, Wellness & More
Some of the largest public health issues across the...