A Discussion about various Nations, Their ideals and their methods; sprinkled with some ideas to take us all forward. Image:http://www.crwflags.com/fotw/flags/int-wpa.html#iwpf
by Nicholas Bc Shumate
Edit
Evangelist
Level 4
1
Nicholas Bc Shumate - 4 years ago Permalink Edit
'Realist versus Radical' is what is occurring in the American Democratic party. Senator Sanders champions the populist campaign of actually taking care of our citizens, taxing wall street trading to fund tuition at public colleges and universities, reallocating ACA 'Obama care' funds from the Federal Government from subsidies for insurance premiums and instead paying the providers directly, essentially killing off the insurance industries that lobbied to gut the ACA. He echoes the American people's anger and resentment at spending money to bomb Syrian children while we bankrupt our students with Fed loans.

Secretary Clinton, well to be blunt? She's the embodiment of every thing wrong with the American political system. She spent two years after stepping down as Secretary of State giving speeches to wall street banks for $250,000 USD per hour, her own contractual stipulation. Since the beginning of Sander's campaign she's acted as a parrot, repeating his speeches three days later.

We're witnessing the death of the Democratic party. One whose chair was Clinton's campaign manager in 2008 and has spared no expense to protect the establishment's candidate. The Radical Liberal has arrived in form of millennial voters and an angry democratic socialist, and we are lighting the match that will burn the corrupt system to the ground.
Save Cancel 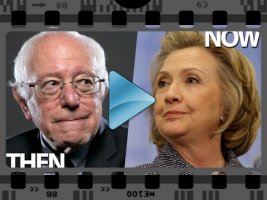 Sanders v Clinton then and now