A Discussion about various Nations, Their ideals and their methods; sprinkled with some ideas to take us all forward. Image:http://www.crwflags.com/fotw/flags/int-wpa.html#iwpf
by Nicholas Bc Shumate
Edit
Evangelist
Level 4
1
Nicholas Bc Shumate - 8 years ago Permalink Edit
The Trans Pacific Partnership is a an international "trade agreement" that is written by Lobbyist factions in a closed court, intended to leave the people it directly affects in the line of fire and with no say in what is to be included.

The specifics are rather grim, including an extension to international Copyright to 100 years after copyright date, as well as extending the copyright-able things to animals, and surgical procedures just to name a few.

Not only that it will also give corporations the power to sue governments for potentially lost profits if the government refuses to allow the companies product to be sold on their markets. This is a direct cause of American Corporations being allowed to involve themselves in national and international politics due to the Citizens United Act of 1988 (PAC), which was an act of gross negligence on the part of the American "Justice" system. This must not be allowed to come into pass, or it will restrict laws regarding even copies of copyrighted material, such as power points, videos, music, pictures, to include both criminal and domestic charges for possession of these items. There is also a clause for "Non-profit possession included in eligibility for criminal charges". The people of each nation must persist in harassing their representatives to trash this bill, if not it will be a global incarnation of 1984.
Save Cancel 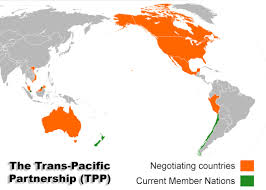 3 Comments
Praveen Baratam, Maven - 8 years ago Edit
@Nicholas - This is nothing but 21st century imperialism / Neo-colonialism.
Save Cancel
Nicholas Bc Shumate, Evangelist - 8 years ago Edit
@Praveen- What if it works? What do we do if they get their way?
Save Cancel
Praveen Baratam, Maven - 8 years ago Edit
@Nicholas - What can citizens do if they don't approve of a democratic government's policies? Spread the word, raise awareness, gather support and protest! Unfortunately, these issues go above the head for most of our fellow men. In fact the whole intellectual property law is completely screwed up but there is no one to protest on these issues!
Save Cancel
There is a 500 character limit on every comment. The input box border turns 'Orange' when you are half way through and 'Red' after you reach the limit. Line breaks are not allowed in comments.
Post Comment Cancel
« View More Posts From This Topic or Create One Now!
Wonderful Web 2.0 Worlds
The future of eCommerce, as far as my imagination goes...
Who Stole Whose?
Very few people realize that a very useful innovation...
What Makes Us Evil?
Its sad that we have started to romanticize and lust for...
The Next Big Thing In Personal Computing
Aren't WiFi routers too dumb for today's digital...
The Miraculous Mind
This talk has changed my entire perception of life and...