Try to figure out the climate conclusively, so no one else will have to worry about it anymore.
by Alistair Riddoch
Edit
Alawys express your thoughts and ideas with relevant images and videos to communicate more effectively. There is a 1400 character limit on every post. The input box border turns 'Orange' when you are half way through and 'Red' after you reach the limit. Only line breaks are allowed in posts.

PS: You cannot create Posts until you reach Level 3 - More Info
Maven
Level 8
2
Praveen Baratam - 8 years ago Permalink Edit
After reading through Milankovitch Cycles (MC) and the genius behind their discovery, its pretty evident that ice-ages (glacials) in the last half million years are mostly influenced by this phenomenon [Fig. 1] ( Ref - http://goo.gl/piVTym ) albeit with some discrepancies [Fig. 2] (Ref - http://goo.gl/VE3htv ).

One of the observations from the past ice-ages is that, at the end of each ice-age, temperatures rise abruptly accompanied by rising CO2 levels and then both of them drop gradually. [Fig .3]

In an interglacial, if the greenhouse gas effect was significant, earth should stay warm and not heed to much weaker insolation variations due to Milankovitch cycles. [Fig. 4] From another perspective, we could attribute the gradual decline in temperatures after each interglacial to slow assimilation / absorption of CO2 by oceans. In which case, green house gases can have a long lasting impact on the climate.

All this calls for a closer examination of the significance of GH gas emissions, exclusion of other factors preventing faster glaciation after each interglacial and further investigation into the forcings behind rapid rise of temperatures at the end of each glacial.

Update: The CO2 system seems to act only as a buffer smoothing out short term variations in insolation but not influencing the trend as such at the observed levels of 180 - 280 ppm.

Proposed uncontested knowns, to be taken as true for review:
http://nssdc.gsfc.nasa.gov/planetary/factsheet/earthfact.html

One comment
Barney Lerten, Contributor - 7 years ago Edit
I, like most of the public, don't have enough scientific background to review such things and decide "who's right." So we shrug our shoulders, muddle along, buy our hybrids, recycle what we can (despite lousy markets and inefficiencies) and hope wiser heads will prevail - not a decision based on politics.
Save Cancel
There is a 500 character limit on every comment. The input box border turns 'Orange' when you are half way through and 'Red' after you reach the limit. Line breaks are not allowed in comments.
Post Comment Cancel
Contributor
Level 3
1
Alistair Riddoch - 8 years ago Permalink Edit
The rotation period of the Milky Way is 225 million years.

This is the effect that gravity has on Global Temperature.

Sometimes we are experiencing Universe PLUS the 2/3 Milky Way, Sometimes Universe MINUS 2/3 Milky way. (Remembering we are not right at the edge of the Milky Way.)

In the next images, see the location and path the Sun takes through the Milky Way, and what the movement is of significant objects around us.
Save Cancel 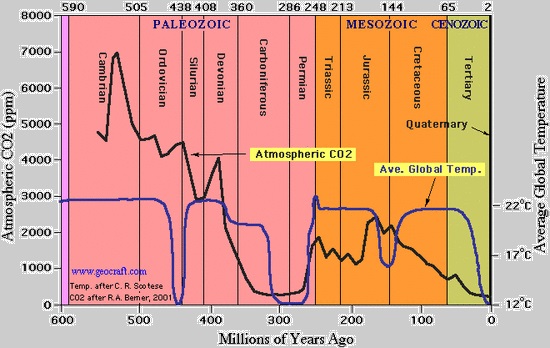 8 Comments - Show All
Praveen Baratam, Maven - 8 years ago Edit
In Fig. 1 I see a 125-150 my pattern not a 225 my one. Even otherwise the gravitational force of Sun on the surface of Earth is 0.0006 times the grav. force of Earth. (Moon is 0.0000033 times) Now lets consider the nearest star Proxima Centauri - 4.25 ly away. Its grav. force on the surface of earth is ~10^-12 times that of Sun. Even if we put the whole Milky Way (Mass - 10^12 Suns) at a distance of 20 ly, its grav. force will not be more than that of Sun on the surface of Earth.
Save Cancel
Praveen Baratam, Maven - 8 years ago Edit
How is the relative motion of Earth inside the Milky Way significant for climate on Earth?
Save Cancel
Alistair Riddoch, Contributor - 8 years ago Edit
Because barometric pressure is caused by two things, the push upwards by the existence of the surface of the Earth, and the push downwards by gravity. Barometric pressure has been shown to be a predictor of upcoming weather, more so than any climatologist model. That should be worth something. Further the polar vortex, is likely stabilized and destabilized by magnetic/gravitational variations, as are the oceans, and the amount of heat generated within the oceans, by stirring
Save Cancel
Alistair Riddoch, Contributor - 8 years ago Edit
yes there are intermediary signals, but the temperature at 0-225-450goes all the way down to 12 degrees. (sure doesn't look like any causal relationship between CO2 and temperature in this graph. They hardly even look correlated, although I guess there wasn't much life around till plants came along to assist with feedback mechanisms.
Save Cancel
Alistair Riddoch, Contributor - 8 years ago Edit
Look at the pictures of the continental movements as the earth was 225 million years ago, now, and expected to look again in 225 million years, see how they are crescent, inverse crescent, then crescent again?? I don't say this IS related to the universe, just that it looks like it could be. and possibly is. and that it would not surprise me, if so. The hot spot of Hawaii is a global mystery because it is rolling around earth at a rate of once every 200 million years or so.
Save Cancel
Alistair Riddoch, Contributor - 8 years ago Edit
no earthbound layers we know of move at such a slow and steady rate. It may point more often than anywhere else, directly towards the "Great Attractor" and over time, the earth reacts. POSSIBLY.
Save Cancel
Praveen Baratam, Maven - 8 years ago Edit
@Alistair - I am not saying that gravity does not affect climate, just that grav. force of distant stars and galaxies is too feeble to cause any significant impact. Lets discuss the most accused CO2 in detail later! Coming to tectonics and evolution of earth's crust - both oceanic and continental - It is largely influenced by the convection currents in the mantle driven by dissipation of internal heat from the core. Why not quantify the effect of 'Great Attractor' on Earth and share with us?
Save Cancel
Nicholas Bc Shumate, Evangelist - 7 years ago Edit
@Alistair- do you have any published papers, or studies that could add some more information and back up your statements? From what I can tell you seem to be drawing conclusions based on pictures with out any kind of peer reviewed research to add context to them, rendering them somewhat useless in validating any conclusion you or any one else could try to make.
Save Cancel
There is a 500 character limit on every comment. The input box border turns 'Orange' when you are half way through and 'Red' after you reach the limit. Line breaks are not allowed in comments.
Post Comment Cancel
Contributor
Level 3
1
Alistair Riddoch - 8 years ago Permalink Edit
Pic 1: Historical temperature and carbon graph showing 400,000 years of data

Pic 2: A 250 million year history of the continents. Notice the inversion of the crescent shape) while circling the milky way one complete rotation.

Pic 3: The expected position of the continents in 250 milion years based on current understanding of tectonics, once again presenting an inverted crescent in while circling the milky way once.

Pic 5: Location and shape of earth's plumes and mantle

400,000 years temperature and carbon by proxy

One comment
Praveen Baratam, Maven - 8 years ago Edit
@Alistair - Fantastic! Now lets examine each of these forcings individually and try to quantify their influence on the global temperatures separately. After that we can debate interactions between individual forcings and deduce net influence on the climate of earth. Lets proceed from less complexity to more complexity to keep things comprehensible for everybody.
Save Cancel
There is a 500 character limit on every comment. The input box border turns 'Orange' when you are half way through and 'Red' after you reach the limit. Line breaks are not allowed in comments.
Post Comment Cancel
Load More
Wonderful Web 2.0 Worlds
The future of eCommerce, as far as my imagination goes...
What Makes Us Evil?
Its sad that we have started to romanticize and lust for...
Telecom & Internet Revolution
How many times did we come across a situation where...
Smart & Frugal Living
Have you ever lived under a roof directly exposed to the...
Health, Wellness & More
Some of the largest public health issues across the...