A discussion thread covering the vast field of human evolutionary history! Remember, Homo Sapiens always cite their sources! Image: http://hs.umt.edu/anthropology/
by Nicholas Bc Shumate
Edit
Evangelist
Level 4
1
Nicholas Bc Shumate - 6 years ago Permalink Edit
I recently moved from South Carolina to Washington and I feel the need to document the cultural differences I have left behind, and gained in a series of posts.

As you may know, Charleston was the largest port for slavery in the colonial era, and since then has worked diligently to preserve the history of the morally bankrupt practice with an almost gleeful pride, with many of the elderly white citizens referring to the Civil War as "the recent unpleasantness". However; I would like to focus specifically on the ethnocentric culture of white supremacy that has a strangle hold on the state itself even to this day, as evidenced by the recent raising of 9 A.M.E. churches throughout the state following the act of domestic terrorism committed by Dylan Roof.

This was then followed by a 2 week debate in the state house and senate over whether or not to remove the Confederate battle flag from the state capital building, which required the repeal of a provision of an entirely unrelated bill that made the flag's presence on the grounds of the Capital building in Columbia permanent in the late '90's.
South Carolina not only has a past of racial violence and oppression, it is currently mired in it, and proud of it, because "Heritage". 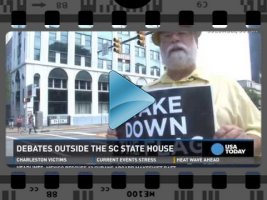 No comments yet!
There is a 500 character limit on every comment. The input box border turns 'Orange' when you are half way through and 'Red' after you reach the limit. Line breaks are not allowed in comments.
Post Comment Cancel
« View More Posts From This Topic or Create One Now!
Wonderful Web 2.0 Worlds
The future of eCommerce, as far as my imagination goes...
The Next Big Thing In Personal Computing
Aren't WiFi routers too dumb for today's digital...
The Applicious
The other day, me and my family were driving to a nearby...
Telecom & Internet Revolution
How many times did we come across a situation where...
Sociodynamics
An interesting revelation that group behavior may be...